The Mer VM SDK is intended for use with QtCreator, on non-linux machines and on machines where a chroot-based SDK is not desired.

The SDK has 3 significant areas:

The Mer SDK uses Oracle's VirtualBox as the virtualisation engine. The website at https://www.virtualbox.org/ has a a lot of useful information.

Other virtualisation solutions should work without any issues. The main requirement is the ability to support shared folders.

Then unzip the image (it's a very large file)

Don't boot/start the VM until you have setup the shared folders or they will not be accessible.

Setting up and Networking

Select the MerSDK VM and then pick Settings

In System/Processor enable PAE/NX and allocate as many CPUs as your host has.

This is not an emulator so there is no point setting any special Display settings.

In Networking set Adapter 1 to "NAT" ( see https://www.virtualbox.org/manual/ch06.html#network_nat ) since your VM will need to access the internet to perform updates.

Since it will need to act as a server for your local host we must setup port-forwarding too.

Select 'Advanced' and then 'Port Forwarding'. In the rules box add: 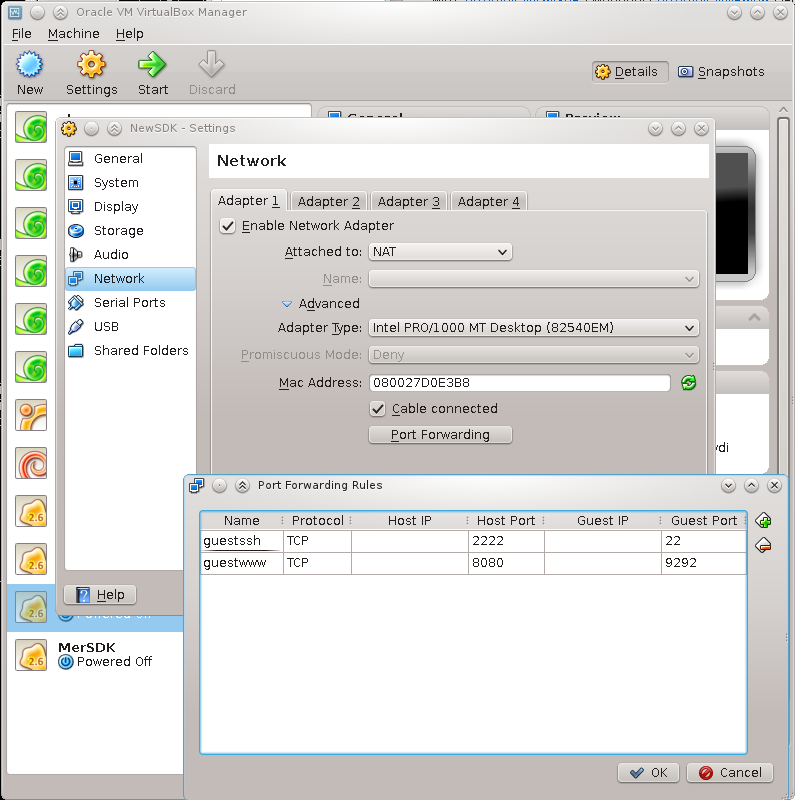 Storage and Sharing your home, source and caches

Make sure /srv/mer/targets exists and is owned by you.

and if you want to login via ssh to mersdk you also need to share your private mer-qt-creator-rsa key folder: Notice! this is a security risk if you let others login to the same mersdk you should NOT use $USER/.ssh folder. instead move mer-qt-creator private key elsewhere. Because you don't want others to see the other private keys.

Do not tick the 'automount' box as that simulates a removable media device which will not work.

Note:Use the folder names as specified, else the VM may not boot.

You may want to share additional source and cache directories from your host.

To enable Virtualbox to support symlinks run this command before launching the VM:

You may now start the SDK VM. It will start an ssh service which can be accessed as:

Ensure your ~/.ssh/authorized_keys files has your own public key in it and you can access mersdk user with no passwd:

This is important for QtCreator to work seamlessly.

(in vm, your host home dir is mounted at /home/mersdk (mersdk's home on vm), so your ~/.ssh/autorized_keys is used for authorizing access to mersdk@localhost:2222)

The SDK uses the Virtualbox shared folder mechanism which needs to support files stored on various hosts and does not support certain features:

If this is a problem then virtualbox can be configured to store data on dedicated virtual or mapped drives (the details of this configuration are beyond the scope of this document).

Currently you will need to build QtCreator on your local machine. Binary downloads should be available eventually and we hope the plugins will be merged upstream.

There should be a Mer button on the left toolbar; if this is not present then you will need to either enable the Mer plugin (Help -> plugins) or ensure you have the correct QtCreator installed.

In the SDK Control Center (http://localhost:8080) go to Targets and add a new target.

This will take a while but the progress will be shown at the bottom of the screen.

Once this is installed go to : Tools -> options -> Mer -> Targets and add the target. It should appear as a subdirectory of /srv/mer/targets/

The process takes a few seconds, connects to the VM and checks the compiler etc. It then says "Successfully added target".

Now you have a Mer Kit.

VM is not registered

If you get "VM is not registered" when testing connection to Mer SDK VM, shutdown VM, close VirtualBox manager and move MerSDK entry to the top in

You should see several tabs; the Qt Versions and Compilers should have the values filled in for your Mer target.

In the Kits tab there will be a new Kit for your target; select that. You can add a device here for deployment if you like.